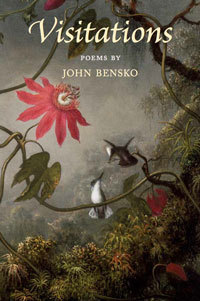 Richard Mathews, series editor, writes: "In Visitations, Bensko pushes readers to enlarge their vision through imaginative leaps; his poems are visitations to multiple times and places, indwelling bodies and circumstances. He allows us to inhabit both sides of a war, to move from the Hudson River Valley to Mississippi, or to draw our souls through sheep, oxen, and shark; we are unmoored from time and place to explore what it means to be fully human."

Robert Morgan describes John Bensko's collection, Visitations, as "a book of portraits and voices, many voices, all of them vivid and memorable. Rivers speak, weeds speak, and figures from American history tell us their stories . These finely crafted monologues are intimate windows into the past, and the way the past touches the present. Both the atrocities and glories of our world come to life in these poems of witness, lament, celebration, and the often painful mystery of love."

"The only way John Bensko knows how to write is to tell the truth. This he accomplishes with such a deft and unerring hand that one is startled by it. I sit back after reading one of these and have to catch my breath, a little shaken by encountering a poet whose instinct guides him straight to the heart of the matter . . . I rejoice that poetry this good is still being written," writes Richard Tillinghast.

Bobbie Anne Mason writes: "These poems are thrilling, mysterious--eye popping. John Bensko boldly ventures into the nineteenth century of the American frontier and of the psyche. The landscapes are wondrous, frightening, and sublime. The poems about snow and frozen Niagara Falls, not to mention the one about ectoplasm, will chill your bones. The book is beautiful."